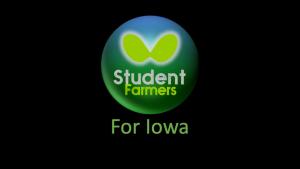 Our GREENandSAVE Staff is pleased to inform our members and readers about organizations that are helping to promote sustainability. If you would like us to profile your organization please Contact Us.

Student Farmers is actively looking to recruit a student ambassador in Iowa, as well as farm mentors in Iowa that can help guide students. Overall, student farming is a great way to reduce the distance from farm to table and increase health for students as well as their parents.

Here is an overview on Student Farmers

Student Farmers is a growing group of students who are committed to in-home and in-school sustainable farming as a means to promote physical fitness and environmental stewardship.

Our Mission: To improve health and nutrition education, combat the challenges of climate change, and support each other in generating some revenue to help pay for college.

Our Vision: To increase knowledge about the advantages of eating more heathy and locally grown vegetables across the range of high school and college age students. We also hope that many of the parents of the students will learn from their children’s engagement in our organization and adopt a diet with less processed foods to reduce the growing cost of healthcare.

Here is an example of an agriculture education program in Iowa:

AMES, Iowa — Taylor Patterson doesn’t look like a grizzled veteran. And she doesn’t really think of herself as a pioneer or groundbreaker.

But looks can be deceiving. This 20-year-old college student is the first female infantry soldier in the Iowa National Guard.

As is the case with many groundbreakers, Patterson’s choice wasn’t really about being the first. And the reception wasn’t always one of congratulations.

While still in high school she began considering a military commitment.

“I decided I wanted to join the National Guard,” Patterson says.

Once that decision was made she talked to a recruiter, who encouraged her and explained some of the options available. When she told him she wanted to do infantry, he was a bit taken aback.

“He looked at me like I was crazy,” she says.

Her parents were also a bit surprised.

“They were both like, ‘Where did this come from?’” Patterson says. “They were pretty dumbfounded, but they supported me.”

The choice to join the guard was made while still a student at Ankeny High School. She graduated from AHS in 2020 and then took one semester of classes at Iowa State University, where she is majoring in animal science. In January 2021 she reported to basic training, where she spent the next 22 weeks training to be an infantry soldier. She then returned to Iowa State.

Right now she is taking classes, working part-time as a waitress and also at a university farm. At the moment she is considering the idea of eventually getting a master’s degree in agricultural education so she can be an agriculture teacher.

The choice to study and eventually teach agriculture was just as surprising as the one to commit six years to the Iowa National Guard. Patterson didn’t grow up on a farm, and her high school did not have an FFA program. But she had great-grandparents who farmed and she always enjoyed the time spent there.

In high school she played softball and was on the trap shooting team. But she always had an interest in agriculture.

In the meantime, she will continue to serve in the National Guard, spending one weekend a month at Camp Dodge and spending two weeks each summer training. Her parents, Justin and Cynthia Patterson, have learned to live with having a daughter in the infantry. And her little brother recently enlisted in the National Guard.

“Maybe he decided big sister couldn’t be tougher than him,” she jokes.

But Patterson can’t resist adding that she’s the one in the infantry.