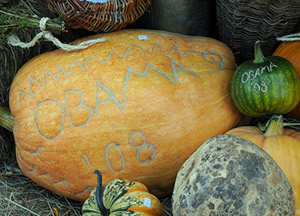 According to recent reports about the dinners held at the White House, an interesting trend is emerging. It seems that the Obamas are making a concerted effort to bring organic and locally grown food into the kitchen. At a recent White House State Dinner in which Governors from across the country attended, the food served had an organic focus, and even the wine choices were tweaked to better accentuate the organic foods.

Planning for the dinner began before Mr. Obama had even been elected President, so at a rather late point in preparation the President brought change to the dinner table. The White House Food and Beverage manager, Daniel Shanks said the request from the Obamas to focus on organic foods caused him to really “change [his] whole perspective.” Mr. Obama wanted to show the world that there is a better, healthier way to eat, and just because you one can afford to eat most anything they want, that it is in our common interest to take into account where our food comes from, and how it has been processed chemically.

The hardest part in staying organic at these fancy dinners is to procure organic wine. Bugs, mold, and fungus are natural parts in the winemaking process, and often face treatment with chemicals to counterbalance these other organisms. Three vineyards that meet the organic test are California’s Spottswoode, Oregon’s Archery Summit, and Michigan’s Black Star Farms. Mr. Kass, when asked about the last minute organic wine switcheroo, stated “We didn’t change the quality, we just changed the thought pattern.”

The new thought pattern seems to be working out so far, as after the presidential toast, Mr. Kass and the rest of the White House chefs were introduced to the room full of the country’s most influential people. Mr. Shanks explained the menu by saying “It’s a different world, this is an entirely forward-looking project.”

The new world might also be in for a new organic garden on the White House lawn, as there is a serious movement afoot to get the President to at least plant some crops that can be used for Oval Office consumption. Mr. Obama has stated many times that the “farm bill” is not adequate, and simply tossing $25 billion a year to industrial agri-business while giving a pittance to organic and small-scale farms is not the way to promote sustainability.

If the American public were to take their cues from an organic garden at the White House, eating habits could improve while transportation costs of various foodstuffs would definitely drop, which would also lead to a lessening dependence on fossil fuels. Say what you will about the Obama Administration, but you have to admit that their goals are certainly ambitious.

GREENandSAVE.com is a free resource for anyone that wants to save energy, money, and the environment. The articles, product reviews, online tools, and return on investment calculations are researched from a diverse range of public and private sector sources. Overall, the company is passionate about saving money as well as creating healthy homes, offices, and lifestyles.

For information on how to stay organic and make your life more GREEN, take a look at the Green Lifestyle section. Or, for an idea on where to start with organic food, check out this article from GREENandSAVE.com: A Sweet Alternative to Refined Sugars.