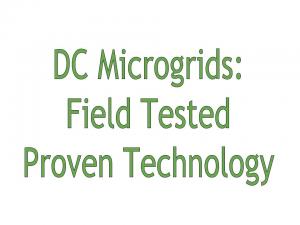 Recent GREENandSAVE articles such as DC Microgrids and 7 Reasons You Should Switch From Alternating Current (AC) To DC Microgrids both help to explain not only the understanding behind DC microgrids but also the explicit reasons for why it is advantageous over an AC system, such as its ability to reduce energy consumption and offer a higher return on investment (ROI). DC microgrids also offer numerous advantages compared to their traditional AC system counterparts, most notably the fact that this technology has been field proven for almost any setting in need of electricity. A wide variety of companies and facilities across the US have begun to recognize that DC microgrids can offer them an optimal combination of affordability, scalability, and reliability that other existing solutions simply cannot match.

Nextek Power Systems lists all of their case studies on their website, such as the IEEE Haiti Relief Effort, an international effort to strengthen energy security in third world countries who do not have such widespread access to electricity as other countries like the US do. As a result of this, Nextek designed the “STAR (Stationary or Transportable Available Resource)”, which is designed to help communities who up to this point did not have any power. It does this through a combination of “a deployable solar array, battery charging station, portable battery packs and LED lights, [making] it possible to power homes and small businesses anywhere…” This simple solution has already seen incredible results in terms of a low, affordable cost for every homeowner using this system, but also because of a high demand for this product by the local people. The success of the STAR model is just one of the highlighted case studies for Nextek power, who provide others in different situations that illustrate the local and international benefits to DC microgrids.

S&C Electric Company has developed a microgrid solution for the city of Field, Canada, who because of its location, has commonly experienced difficulties as hydro-repair crews cannot easily access the electricity distribution line in times of outage, as it is nestled between the railroad tracks and fairly dense forest, causing longer delays until the problem can be tended to. To fix this problem, the town installed a 1 Mw storage battery, which during a power outage will be able to access stored power for a supply time of 7 hours, giving officials time to repair the lines. The battery can also supply power to the system during times of high demand, in order to lighten the load and improve power reliability. It is also noted for its ability to reduce greenhouse gas consumption, extend the life of existing transformers, and lastly eliminate the need for diesel power backup units. This is just one example of S&C’s case studies that exemplify the status of DC microgrids as proven solutions. For more on this and other S&C case studies, visit their web page.

The London City Airport has recently begun collaborating with UK Power Networks Services (UKPNS) to double the size of the airport’s electricity distribution to 7 MVA. This microgrid technology will notably incorporate solar power in addition to a supervisory control and data acquisition (SCADA) system, specially designed to increase energy efficiency, reliability, while at the same time also making prices more affordable. [1] When explaining the decision to upgrade the airport’s energy system, officials cited that a project of this nature and magnitude will help to counteract climate change through a more sustainable operation that lessens carbon emissions (in an attempt to come closer to their goal of being net-zero by 2050). [2] In doing so, this project would thus improve the air quality in the areas surrounding the airport and help to meet London’s own climate change goals. [3] With sustainable development a top airport priority, this project had too many short and long term advantages that could no longer be ignored.

For more information on this project:

All of these readily available and incredibly successful projects using DC microgrid technology necessitate the question, so then why haven’t DC microgrids become popular faster?

DC microgrids have struggled to break into the markets of developed countries partly because of antiquated building codes. These increase the difficulty in setting up DC power locally, and even when these hurdles are overcome, property owners struggle to construct such a system. And even if property owners do overcome this hurdle, they will still struggle to find advice on how to construct such a system. Furthermore, in the past, it has been difficult to find electricians and/or builders that understand not only how this can be done and implemented, but also who know where to look to refer to the proper codes. [4] More specifically, industry standards, such as establishing voltage codes, is another one of the major issues that DC microgrids are facing, as it is a complex process that differs on a case by case basis based on what type of appliance or setting the technology is being used in. [5] Luckily, the EMerge Alliance, is an organization working to resolve some of the issues that DC microgrids currently face, in the hopes of developing these standards to be able to eventually rapidly adopt DC power distribution in commercial buildings. [6]