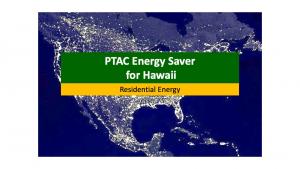 TIME TO ACT: Save 20% or more on HVAC. It’s important now more than ever for a sustainable future!

Business owners and homeowners face increasing challenges with energy costs to save energy and money in Hawaii.  PTAC Energy Saver offers an Adaptive Climate Controller (ACC). It is a proven HVAC energy saving devicethat quickly installs on PTAC units. There are many companies that claim to produce energy savings, but the ACC device is multi-panted and proven over many years. Plus, it has extensive validation tests by organizations such as:

Typically, when an HVAC system turns off, shortly after, the blower fan motor turns off. The ACC reprograms the blower fan not to shut off but to throttle back the rpm airflow to an exceptionally low speed, quiescent level airflow or “idle speed”. This allows for a gentle but continuous air movement into the building that helps keep equilibrium of climate conditions in the occupied space and saved energy.

Here is an example of some Residential HVAC Energy Saving info for Hawaii:

Hawaii residents traditionally built with cooling in mind. Windows were placed to maximize cross ventilation and jalousies let in the breeze.

But with global temperatures rising rapidly – the world just had its hottest July ever – and decreasing trade winds, Hawaii’s residents are relying more and more on what used to be a rare luxury: air conditioning.

“As a kid growing up in Ewa Beach, we never needed air conditioning,” said Shannon Tangonan, a spokeswoman for Hawaiian Electric Co. “Now, you really do need it. It’s almost unbearable. We go as long as we can without turning on that AC, but come noon, one o’clock, it gets to the point where it’s like, OK, turn on the AC.”

In 1970, only 14% of Oahu’s residential utility customers, and 2% of those on the neighbor islands, had AC, according to surveys by HECO.

Today, AC is part of life for 68% of Oahu’s residential HECO customers, more than half of those on Maui, Molokai and Lanai and 32% of those on the Big Island. That doesn’t include businesses or the 1,000 Hawaii classrooms that have put in AC in recent years.

The spike is part of a global trend. As the world warms and becomes more developed, the demand for air conditioning in hotter regions like Hawaii is expected to skyrocket. While the comfort of cooling may improve quality of life, experts project the soaring energy demands will have major monetary and environmental impacts. Ironically, increased air conditioning usage threatens to exacerbate global warming.

“It’s this vicious cycle that’s going to drive up our greenhouse gas emissions unless we’re smart about it,” said Jeff Mikulina, executive director of the Blue Planet Foundation, a Hawaii nonprofit that advocates for clean energy.

The trend is occurring as Hawaii pursues a state mandate to produce all of its electricity with renewable energy by 2045. Increasing AC usage is an obstacle to weaning ourselves off of coal, said Brian Kealoha, executive director of Hawaii Energy, a ratepayer-funded energy efficiency and conservation program.

“As we think about how we get to our 100% clean energy goal, part of how we were going to get there was a reduction of our usage,” he said. “But with air conditioning now, in a lot of cases, we’re increasing that overall usage.”