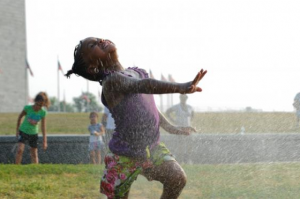 These aren't the first days this summer where we've had these warnings, and I know that the Washington, DC, region is not alone in its unhealthy air warnings. Temperatures are soaring across the U.S. - and while one major source of air pollution is vehicles, the other major cause is burning coal for energy.

And with this comes new research that poor air quality days aren't just a struggle for your lungs, they're just as tough on your heart. This is news from the combined efforts of the American Lung Association and the American Heart Association, who are reminding us that while some pollution levels may be decreasing, we’re learning that air pollution is actually much worse for us than originally thought.

From one article on this research:

While risks to individuals are small and are dwarfed by risk factors such as smoking, high blood pressure and obesity, the overall effect on the public is big, says Robert Brook, a cardiologist at the University of Michigan and lead author of the report.

Much of the worrisome data concerns "fine particulate matter" - tiny bits of soot that come from burning coal, oil, diesel fuel or wood, mostly in factories, vehicles and power plants.

"These fine particles get deep into the lungs," says Norman Edelman, chief medical officer of the American Lung Association....It's also possible that some fine particles seep into blood vessels and the blood itself, causing direct damage. Dirty air also may trigger irregular nervous system activity that affects the heart and blood vessels.

Some in Congress want to gut EPA's Clean Air Act powers - and yet air pollution levels are so dangerous that these unhealthy air warnings recommend that kids should not be outside. Kids should not be outside in August? Right. Summer vacation is still in full force, so kids are outside, and that means they are at risk of permanent lung damage because the oil and coal companies are holding congress hostage.

We are literally killing ourselves by burning coal, and yet the coal industry continues to fight against the Clean Air Act and any safeguards that might prevent them from spewing their pollutants into the air.

This is shameful. The coal industry would rather make money than clean itself up.

We must support clean, renewable energy sources that don't pollute the air and contribute to unhealthy air warnings when temperatures climb. Coal-fired power plants spew millions of tons of pollution into the air ever year, which spreads from state to state and causes numerous health issues.

Thankfully, EPA is acting to help states be good neighbors with the proposed 'Good Neighbor / Transport' rule that will systematically and efficiently cut pollution from dozens of coal plants that would otherwise spread across the country. The rule is intended to help downwind states achieve EPA's national ambient air quality standards for ozone and fine particles.

We applaud this common sense approach by Lisa Jackson and EPA to protect public health and help states clean up their air efficiently and cost-effectively.

You can make your support heard for this rule at one of the three upcoming public hearings (first one is next week), or by submitting your own comment.

This post originally appeared on Compass, the Sierra Club's blog. Bruce Nilles is the Director of the Beyond Coal Campaign.