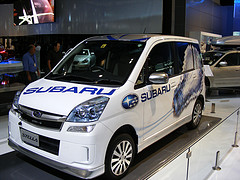 Did you know the transportation sector contributes more carbon dioxide than any other sector? With the focus on “green” this and “green” that, you’d think that this area would benefit the most from new technologies. (Un)fortunately, most car companies are looking at reducing car emissions and increasing gas mileage instead of looking at the entire lifecycle of the car manufacturing process. This is all fine and dandy, but until we have the infrastructure required for hydrogen cars (keep those cell phones off!) and an updated electrical grid in our nation for all of the electric cars, improving the lifecycle of the manufacturing process seems like the quickest and best short-term solution. Luckily for us, some car companies are looking at their carbon footprint and helping improve the environment around them, creating a healthier environment for their workers, and for their clients.

***Did you know that some car companies don’t offer leather seats to please GREEN consumers? Check out the Toyota Prius, Ford Escape Hybrid, BMW’s synthetic suede option for seats, upholstery and steering wheel, and even Mercedes Benz offers a “no leather” package!***

Here are some of the GREEN car manufacturers that are taking Corporate Responsibility to a new level:

You know that can of garbage that gets picked up weekly by the sanitation department and takes to a landfill every week? That is more garbage than the Subaru of IN Automotive (SIA) sends to a landfill EVERY YEAR!!! Subaru calls it “Corporate Social Responsibility” but it goes beyond anything any other auto manufacturer does. Back in 2002, SIA designated 800 acres as a National Wildlife Federation Backyard Wildlife Habitat-the first in the auto manufacturing industry. In the same year, they also received the International Organization for Standardization 14001 Recertification, a cornerstone of the environmental mangemement award! Subaru’s marketing campaign has been Think, Feel, Drive-but inside corporate it would be Reduce, Reuse, Recycle.

Through Subaru’s commitment to the environment they have reduced solvents by 79%, 61% in sludge and a 6000 gallon annual reduction in oils. Because of this, Subaru has reduced its Toxic Release Inventory by 40%!! Their reuse project is just as impressive-33000 brass lug nuts that used to be thrown out, now go back to the manufacturer AND Subaru gets a discount reducing costs as well as reducing waste in landfills! Over 35000 gallons of solvent are reused annually; along with 34M lbs of packaging material (do you want to buy a Subaru yet?). Due to their efforts, Subaru has achieved a 99% recycling rate. They even chip the 378000 lbs of wood pallets from the factory and use it around the almost 35000 trees on the grounds!

The Allegiant Global Services helped Subaru achieve 0% landfill in less than 2 yrs, The key to this is looking at each piece of refuse (from Styrofoam packaging to oil caps) and considered whether it will be used in 1 of its original or secondary form (i.e. tires that are grated and then used in children’s playgrounds). More waste is given to Covina Energy, where they extract energy from the waste. The waste creates steam which is then converted into energy. In fact the EPA has estimated that Waste to Energy (WTE) produces electricity with less environmental impact than almost any other source of electricity! Covent process approximately 15 tons of waste or 5% of Indianapolis and the county it resides in.

Toyota started building its Camry at this plant in 2007 and will manufacture up to 100000 when at capacity. Toyota which is already very environmentally conscious, will be learning even more from Subaru.

***More than a ¼ of the adult population-or approximately 56M people say they look for products that are “healthy and sustainable.” Research also suggests these people are willing to pay a higher price for environmentally friendly products. ***

The LOTUS, a high-end sports car, is not one you’d think as being environmentally friendly-but even this has gone GREEN! Their new car, the Eco Elise incorporates sustainable materials such as: locally grown hemp (used in the seats and composite body panels), sisal, eco-wool, and a high-tech water-based paint in the body and trim. Fuel efficiency is improved by the lighter weight of the materials (with the same aluminum frame) and a “green gear change display.” Solar panels have also been added to the roof of the car to power the electrical system (stay clear if you live in Seattle!). They are also utilizing the 3Rs (reduce, reuse, recycle) in the manufacturing process as well. Environmental improvements at the Lotus factory have reduced electricity usage by 14%, gas by 30% and water by 11%, while recycling 57% of their waste products.

***Crossover consumers account for approximately $226.8 billion in sales of alternative products which include: organics, cruelty-free cosmetics, and hybrid and other low emittance vehicles. ***

While continuing to research other fuel alternatives (hydrogen, ethanol, electric and who knows what else!), car manufacturers are also acting in a more socially responsible manner in taking into account their carbon footprint - or at least trying to practice the 3Rs more frequently. Car manufacturers are looking at the “life-cycle” of the car and trying to reduce their carbon footprint-which as you can see goes far beyond what type of fuel you are using in the vehicle itself! GREEN materials from vegan foam (used in Saabs) and hemp, to the life of the components and the technology used to help reduce emissions of solvents and CO2 in the lifecycle of the vehicle.

***2008 GREEN car of the Year is the Chevy Tahoe Hybrid-the first GM vehicle to use the company’s all new 2-mode hybrid system. Other vehicles that were nominated include the Chevrolet Malibu Hybrid, the Mazda Tribute Hybrid, the Nissan Altima Hybrid and the Saturn Aura Hybrid. ***