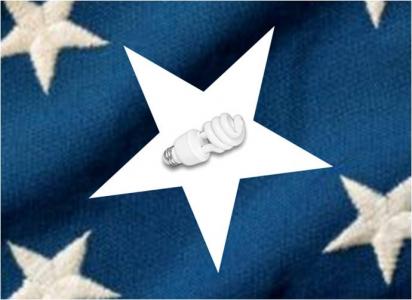 If you have not already changed old incandescent and compact fluorescent lamps (CFLs) to light-emitting diode LED bulbs, then CHANGE to LEDs TODAY.

Some desk lamps, accent lighting, or lights in out of the way areas may still be incandescent or CFL. Incandescent lamps were the standard light bulbs used for the past century. They are much less efficient than the alternative, compact fluorescent lamps (CFLs) that were the preferred energy-saving choice until the LEDs emerged and the LED cost cam down to levels comparable with CFLs. A 25-watt CFL has the same light output as a 100-watt incandescent. The 75 percent reduction in energy use is only one way in which these bulbs produce savings. CFLs last much longer—typically nine to ten times longer than incandescent lamps. LEDs are even better at under 10 watts. LEDs save 90% over incandescent and 50% over CFL, and they last much longer than both previous technologies. So, stop changing burned out bulbs to old tech, and switch to LEDs

LEDs continue to come down in cost. Install them in places where the light is usually on for long period of time. In those locations, they can pay for themselves very quickly. If you pay $3- $6 on average for an LED bulb and install it in place of a 100-watt incandescent that usually operates 8 hours a day, it can pay for itself in less than a year, generating a very cost effective Return on Investment.

Your return will be even greater with utility rebates that may be available in your area. Where lights are operated frequently, LEDs are a great option to cut energy—and maintenance—costs. Lighting accounts for about 21% of an office's energy costs. LEDs bulbs use 50% less energy and last longer than CFLs. They now come in a range of sizes, so they’ll fit almost any type of fixture, and styles, including full-spectrum, which mimics natural sunlight. Test out one of each - Soft white, Bright White, or Daylight, and see which one works best for your employees at different locations. Traditional incandescent bulbs use more energy because the majority of electricity generates heat, not light.

Replace 20 incandescent bulbs that are 60 Watts with a life expectancy of 1,500 hours.

Replacement LEDS use less than 8 Watts and last for 24,000 hours or longer. At an average of about 3,000 hours of illumination in a typical office, this is over 8 years of life.

The ROI Calculation is based on replacing 20 bulbs that typically burn 750 hours per year with LEDs that cost $3.00- $6.00 each, and average cost of electricity that is $2.76 per day. Each bulb saves on average $4 to $7 per year. To get perspective on the savings, also see the LED Lighting Calculations.

Make it easy on yourself and work with a qualified lighting provider: Easy Lighting Upgrades

Go for a US LED manufacturer, to compare prices and options.