3 Reasons to Worry Less About CFLs 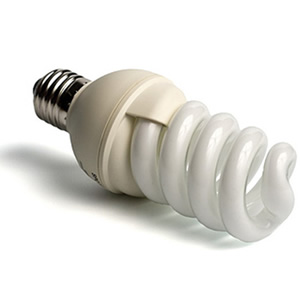 If you’ve heard only one thing about the green movement, it was undoubtedly the benefits of Compact Fluroescent Lamps in comparison to their more popular brother, the incandescent bulb. And just for the completely uninitiated, the CFL uses 75% less energy than incandescent bulbs, and, as it lasts longer as well, it will save you about $30 over the course of its use.

There are some lingering suspicions related to CFLs that may have caused some to take pause when considering the switch to CFLs, such as the supposedly high mercury content, the idea that they have higher “embodied energy”, or that moving away from incandescent bulbs will negatively impact your heating bill. These are all very silly reasons to avoid a product that is guaranteed to work better, for longer, and cost you less money. Here’s why:

CFLs do include some mercury in their production, which makes many people wary about keeping them in the house, and disposing of them after they have fulfilled their usefulness. If a CFL breaks, there will be a small amount of mercury released; however, according to researchers at the Lawrence Berkley National Laboratory the danger is vastly overstated.

If you do a proper clean up of a broken CFL, including opening the windows and removing the old pieces, the exposure you face to mercury is no more than you would get from one bite of a tuna sandwich. And even if you felt like tempting the fates and smashed a CFL with all your windows and doors closed, the result would be the same as if you ate one can of tuna.

When people talk about embodied energy, they mean the amount of energy required to manufacture, transport and dispose of an item. Many people clamor that the process of making and shipping CFLs to their destination negates any possible benefit one might derive from using the bulb. The CFL’s embodied energy is about 4% of its total energy, and while it takes about 1 to 2 kilowatt-hours (kWh) of energy to ship a CFL, even from China, to its destination, the CFL will save over 200 kWh during its use.

Lastly, anyone who mentions an increased heating bill once incandescent bulbs are replaced does not know much about energy efficiency. Incandescent bulbs create light, but as a byproduct they also produce heat. The heat from these bulbs is such an inefficient way to heat anything that it’s really hard to believe that someone would even see their heating bills go up a fraction of a cent. Their total energy bill will undoubtedly lower, as they are using less energy to create the same amount of light. CFLs may even lower you energy bills further in the summer, as there is no excess heat that the air conditioner will have to deal with coming from incandescent bulbs.